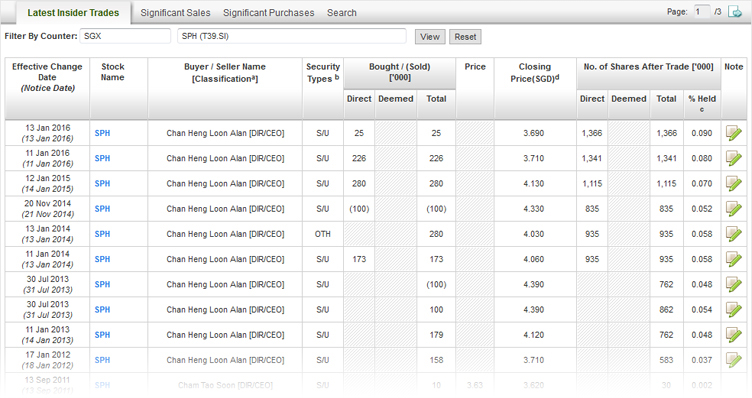 Insider Trades shows the trades made by substantial shareholders or directors of the company. Company buying back its own share is also recorded here.

Purchases by the directors and company share buyback may indicate the share price is undervalued and brings confidence to the price trend of the share price. A substantial shareholder selling consistently without a good reason may be a potential sign of trouble.

This allows you to spot any interesting transactions made.

All About Insider Trades

We do see substantial shareholders or Directors/CEO of listed companies buying or selling the shares of a company through the announcements made on the SGX portal. Companies make these announcements in order to comply with those listing rules which are designed to ensure transparency in the shares dealings of these groups of shareholders. CEOs and Directors by virtue of their appointments are expected to be informed about the operating performance and strategic plans of their companies, while substantial shareholders by virtue of their substantial holdings are potential market movers when they buy or sell their shares. There are many lawful (i.e. not breaching Insider Trading laws under the Securities & Futures Act) reasons why these parties will buy or sell their shares.

The Insider Trades feature in ShareInvestor WebPro and Station collects and displays all the latest insider trades by calendar month or by company ("Select Counter" filter) for SGX and Bursa markets. Details provided include the names of the Buyer/Seller, Classification (SSH/DIR/CEO), types of Security involved, quantity bought/sold (broken up by Direct/Deemed), price (transacted), price (closing), post-transaction ownership (no. of shares/%) and additional notes. When Insider Trades of a company is selected, the current and historical transactions allow trends and patterns of insider trades by SSH or DIR/CEO to be analyzed.

In summary, the Insider Trades feature allows us to:

Significant purchases are "buy" trades made in the past 14 days by substantial shareholders or Directors/CEO of the company. These are then sorted by volume in descending order.

Significant sales are "sell" trades and using the same logic as above.